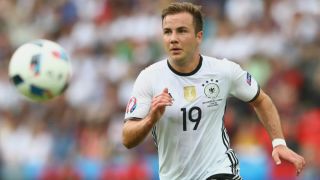 Borussia Dortmund coach Thomas Tuchel will be able to lift Mario Gotze back to his best, according to the club's CEO Hans-Joachim Watzke.

Gotze completed a move back to the Westfalenstadion on Thursday, three years after his controversial transfer to Bundesliga rivals Bayern Munich.

The attacking midfielder won back-to-back league titles with Dortmund under Jurgen Klopp but left to join Bayern in 2013 in a deal worth €37million.

However, Gotze was unable to make a telling impression at Allianz Arena, despite holding a better scoring record with the German champions.

But Watzke believes Tuchel, who replaced Klopp ahead of last season, can bring Gotze - the hero of Germany's 2014 World Cup win - back to his best.

"We are convinced that our coach will bring back Mario back to the top level he had with us," Watzke told Bild.

"In Munich, Mario started thinking too much while playing soccer. He's certainly lost a little self-confidence."

"Mario has certainly not taken the path of least resistance. On the contrary. His decision to return is a courageous one," he said.