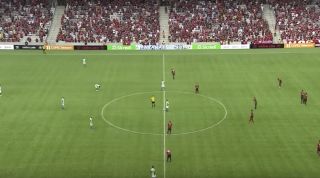 Kick-off was supposed to be just moments away in Sunday's Brazilian derby between Atletico Paranaense and Coritiba in the Campeonato Paranaense, but television broadcaster Rede Globo decided to launch a decisive intervention at the last minute.

The network refused to allow the match to go ahead because both clubs planned to stream it on YouTube and Facebook in protest at the amount of money the company paid for the TV rights.

Referee Roberto Alves was informed by league chiefs that the two clubs didn't have the correct media accreditation, which forced him to postpone the clash and leave fans of both teams immensely frustrated.

Atletico president Luiz Sallim Emed called the move "a global shame" and laid into the television network and the league.

"It is an arbitrary attitude shown by the president of the federation, preventing the start of the game," he said. "We, the clubs, will not allow the transmission to be withdrawn."

"It's a narrow, obtuse idea from the federation's president. We are still going to break down this barrier, and not be held hostage by some broadcasters."