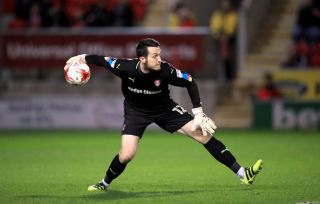 Rotherham manager Paul Warne has confirmed two of his players are in self-isolation after contracting symptoms of coronavirus.

Goalkeeper Lewis Price, whose brother has tested positive for the virus, and striker Freddie Ladapo are both feeling unwell and are staying away from the League One club.

Newcastle have temporarily recalled Dan Barlaser in order for him to self-isolate as the Millers have been training as normal this week.

“Lewis Price’s brother has got coronavirus and he has had some time with him,” Warne said.

This run-in is going to be quite something…#EFL | #SkyBetLeagueOnepic.twitter.com/cgZ7fc3Lix— Sky Bet League One (@SkyBetLeagueOne) March 10, 2020

“He didn’t know at the time. He has got symptoms, so he is now self-isolating for two weeks.

“Last Friday before we got the news the game was off, Freddie had a fever which is obviously a sign. He is self-isolating for a week. We won’t see him now for a bit.

“Dan Barlaser got called back to Newcastle, they didn’t want him to train, they wanted him to self-isolate. So that is out of my hands as well. That is the only concern for us so far.”

With the season now being suspended until April 30 at least, the English Football League has advised clubs to stop training for the next fortnight.

The EFL, along with the Premier League and Football Association, is determined to finish the 2019/20 season, something Warne would prefer given his side currently sit in an automatic-promotion place in League One.

But despite what is at stake, Warne is remaining pragmatic about the situation.

“The position we are in we would love the season to finish, but not to the risk of anyone’s well-being, I am not that crazy,” Warne said.

“If the season got written off, of course I would be disappointed, but you have to put it into context of what is happening in the world.

“I would love to finish, I am not a fan of it finishing behind closed doors, that doesn’t seem right. As the weeks progress it will become more apparent of what is going to happen.

“Things will be out of our control and if we can all get through healthy and happy then I am not going to lose sleep about football.”