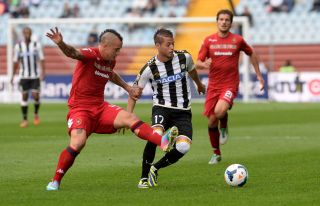 Roma have won all eight of their matches in Serie A this season, in contrast to Udinese's stuttering start.

The Stadio Fruili outfit have won three games but a 1-0 defeat to Milan last weekend represented their fourth loss of the campaign.

Lopez has been in Francesco Guidolin's matchday squad for every game this season but only spent 67 minutes on the pitch across two appearances.

The 20-year-old is co-owned by Udinese and Roma, having moved to the former as part of the deal that saw Mehdi Benatia join Rudi Garcia's side, and is confident his new team-mates are capable of causing an upset.

"Roma are a very strong outfit, who are looking to finish first and win everything," Lopez told Udinese's official website.

"They have been playing a perfect championship so far. We will face them on Sunday and I think we can play a good match and win the three points.