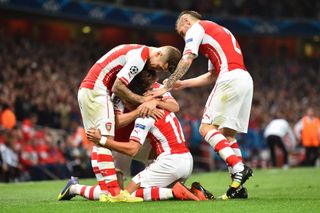 The Chilean forward, who has largely flattered to deceive since making a high-profile move from Barcelona, struck just before half-time in the second leg of Wednesday's play-off.

His effort, backed up by a stellar showing from Jack Wilshere and some dogged defending following Mathieu Debuchy's 76th-minute red card, was enough to see the Premier League side progress to the competition proper for the 17th successive year.

All of the pressure was on Arsene Wenger ahead of an encounter estimated to be worth upwards of £20million for the victors.

But, despite being without Aaron Ramsey following his sending off in a goalless first leg, the Arsenal manager could breathe a sigh of relief.

Besiktas, meanwhile, will have taken great heart from another impressive showing, even if a Europa League campaign now awaits.

Clearly determined to impose themselves, Arsenal began quickly and pressed forward with regularity.

Their approach almost reaped immediate reward, but Wilshere could only drag an effort wide after bursting through from midfield.

Santi Cazorla was the next to threaten, intercepting a dreadful clearance from Tolga Zengin before sending a first-time effort wide with the goalkeeper a long way off his line.

The Premier League side continued to enjoy the lion's share of possession, although Besiktas and, in particular, Demba Ba looked threatening on the counter-attack.

As the half wore on, though, it was the visitors who began to dominate, with Ramon Motta seeing a strong penalty appeal turned down following a wild Wilshere challenge.

The home nerves were finally eased just before half-time, as Nacho Monreal's throughball went through the legs of Wilshere to leave Alexis with the simplest of finishes.

Far from thinking it was a case of 'job done', Arsenal picked up where they had left off after the interval, Cazorla flashing an effort just wide having been picked out by the impressive Alex Oxlade-Chamberlain.

The hosts were clearly determined to avoid any late drama but they could not find a cutting edge in front of goal, as Debuchy headed Cazorla's superb set-piece into the side-netting with time running out.

And the tension was taken up another notch when Ba found space in the area and narrowly missed the target at the other end.

With 14 minutes left, Arsenal were hanging on as Cazorla and Oxlade-Chamberlain both missed glorious chances from close range before Debuchy saw red for a second yellow card.

Calum Chambers replaced Mesut Ozil as a result to shore them up at the back, but it needed a late miss from Ba, who failed to meet Gokhan Tore's cross with the goal gaping, before Arsenal could be sure of their spot in Thursday's draw.