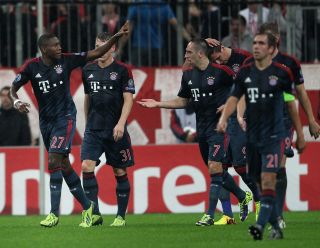 Franck Ribery scored twice to take his tally to three goals in his last two Champions League games as the European champions sent out another message of intent.

Pep Guardiola's side dominated from start to finish, with David Alaba, Bastian Schweinsteiger and Mario Gotze also on target as Czech champions Plzen were totally outclassed.

Free-scoring Bayern have scored 11 goals in their first three Group D matches and they will take some stopping on this evidence, while Plzen are yet to pick up a point.

Ribery (ankle) was passed fit to return to Bayern's starting line-up as Thomas Muller dropped to the bench.

Guardiola drafted in left-back Diego Contento to partner Daniel van Buyten at the heart of the Bayern defence in the absence of Dante (ankle) and Jerome Boateng (suspension).

Plzen, meanwhile, were boosted by the return of defender David Limbersky from a calf injury after a month on the sidelines.

The Germans wasted no time in putting the Czech champions on the back foot and Arjen Robben should have scored just five minutes in, when Mario Mandzukic nodded the ball into the Dutch winger's path, but he failed to hit the target from six yards out.

Plzen were struggling to contain the European champions and they fell behind after 26 minutes, when Robben waltzed into the penalty area and was upended by Roman Hubnik.

Ribery cooly placed the resulting spot-kick into the bottom-right corner of the net for his second Champions League goal of the season.

It was one-way traffic, and Bayern and could have had a second goal two minutes later as the lively Robben released Mandzukic and the Croatia striker dragged the ball back inside, only for goalkeeper Matus Kozacik to come out to narrow the angle and deny him.

Kozacik then kept out a Van Buyten header from close range,  but he could do nothing to prevent Alaba doubling Bayern's lead eight minutes before half-time when the Austrian full-back cut inside and found the bottom corner.

Plzen looked mesmerised by Bayern's slick movement and another fine spell resulted in Ribery crossing for Mandzukic to slot home from close range, but the striker was adjudged to be offside.

France winger Ribery then opted to go it alone after 61 minutes, when he turned his marker inside out on the edge of the box before dinking the ball over the advancing Kozacik and into the net.

Three minutes later, Gotze made an instant impact  after coming off the bench as he laid on a fourth goal for Schweinsteiger, who turned sharply and produced a clinical finish.

Gotze then got his name on the scoresheet in time added on when he converted Robben's inviting cross to seal the win.