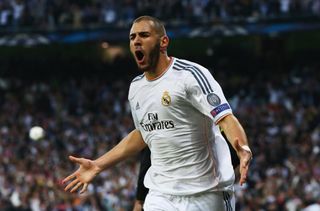 The Spanish giants remain on course to complete La Decima and become the first club to take their European Cup tally into double figures after Benzema's first-half strike at the Bernabeu earned them a precious lead in the tie.

Carlo Ancelotti's men were on the back foot in terms of possession for much of Wednesday's game, but they showcased their clinical side to give the Champions League holders plenty of work to do to progress to this year's showpiece.

Benzema's goal came against the run of play but got Real off to a strong start as the French striker tapped home the opener from close range 19 minutes in.

Despite the return of Cristiano Ronaldo from injury, Real's forward momentum was limited for long spells but they were able to soak up any Bayern pressure.

And that defensive solidity, coupled with the lack of an away goal for the visitors ahead of the second leg in Munich next week, means that Ancelotti and his side can see the final in Lisbon a little clearer now.

Despite a fast-paced opening, chances were scarce early on, with neither Ronaldo nor his team-mates able to threaten Manuel Neuer on his first game back since suffering a calf injury.

Toni Kroos' shot was then blocked by Pepe before Real broke at pace, allowing Ronaldo to find Fabio Coentrao down the left.

And when his cross evaded Dante, Jerome Boateng and Neuer, Benzema was left with the simplest of tasks to finish and put the hosts ahead.

Ronaldo had a glorious opportunity to double the advantage soon afterwards, blazing Benzema's pass over the crossbar, as Bayern struggled to regain their early rhythm.

David Alaba and Franck Ribery went close to threatening a response but they were quickly dealt with, before Angel Di Maria fired over from a tight angle as the game opened up again in the latter stages of the first half.

Ronaldo twice tested Neuer to no avail following the interval and, even after the withdrawal of Pepe due to injury for the hosts, Bayern looked surprisingly toothless for a side who wrapped up the Bundesliga title in record time this season.

Their invincible form has deserted them of late, and even when they pushed for a late equaliser there was no way through.

In a nervy finish, Mario Gotze was denied by a smart Casillas stop before Bayern's appeals for a penalty following a challenge by Xabi Alonso on Thomas Muller were waved away by referee Howard Webb.

On his return to Spain, that left former Barcelona boss Pep Guardiola and his men with nothing to show for their efforts, and facing an uphill task if they are to become the first side to successfully defend the Champions League trophy.