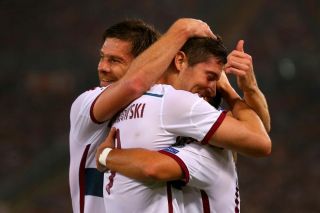 The five-time European champions were expected to face a difficult task in Rome, but Pep Guardiola's men made a mockery of those predictions as they ran riot.

Roma had lost just one competitive home match in 2014 and conceded only once in five wins at the Stadio Olimpico this term, but Rudi Garcia's side were left shell-shocked by Bayern's blitz of five goals in the space of 28 first-half minutes.

The terrific Arjen Robben started the rout before Mario Gotze - who scored twice in Bayern's 6-0 demolition of Werder Bremen on Saturday - doubled the advantage.

Robert Lewandowski's header made it 3-0 after 25 minutes before Robben's second and a contentious Thomas Muller penalty - who also scored from 12 yards against Werder - added further gloss.

Bayern goalkeeper Manuel Neuer had kept clean sheets in his last eight matches and appeared destined to extend that run with superb saves in the second half from Alessandro Florenzi and Gervinho before the latter scored a consolation in the 66th minute.

It proved brief relief for Roma, though, as substitutes Franck Ribery and Xherdan Shaqiri capped a wonderful evening for the Bundesliga champions, who can now reach the knockout stages by beating Roma in the return match at the Allianz Arena on November 5, as Manchester City could only draw 2-2 at CSKA Moscow earlier on Tuesday.

It took Bayern just eight minutes to find the breakthrough as Robben played a swift one-two with Philipp Lahm before cutting inside former Chelsea team-mate Ashley Cole on the right and providing a trademark curling finish into the far corner.

Roma almost found a quick response when Gervinho latched onto Mapou Yanga-Mbiwa's throughball, but he was thwarted by a smart stop from Neuer.

First, Gotze finished a wonderfully crafted move after 23 minutes, receiving a pass back from Muller and side-footing into the left-hand corner from the edge of the box.

It became 3-0 less than two minutes later when the unmarked Lewandowski adjusted his feet well in the penalty area to head home Juan Bernat's left-wing cross.

Lewandowski then turned provider for the fourth with a well-weighted throughball and Robben's strike was too powerful for Roma goalkeeper Morgan De Sanctis.

The fifth arrived 10 minutes before the break when Kostas Manolas was harshly adjudged to have handled while sliding to block David Alaba's low cross and Muller placed the resulting penalty into the bottom right-hand corner.

With the game essentially over as a contest, Bayern relaxed after the break and Roma almost capitalised when Gervinho's shot rebounded off the post in the 54th minute.

Shortly after, substitute Florenzi's half-volley brought the best out of Neuer, who stood tall to beat away the shot.

Neuer then showed why he is considered one of the best goalkeepers in the world when he somehow kept out Gervinho's point-blank shot inside the six-yard box after he met Miralem Pjanic's free-kick.

Gervinho finally got the better of Neuer, though, when he nodded home Radja Nainggolan's cross at the back post.

Bayern were not finished, though, and Ribery's sublime deft chip restored his side's five-goal lead before De Sanctis spilled Rafinha's 20-yard shot and Shaqiri rounded the goalkeeper to net.