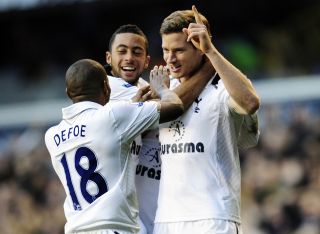 Defoe's sixth goal in the competition this season sealed the Group K victory for Spurs, who took the lead after 12 minutes thanks to a powerful Jan Vertonghen header in Tiraspol.

The Moldovan side will feel hard done by though, as they dominated large spells of the game and had a series of chances to score.

Defoe's late goal saw him level the European record set by Tottenham legend Martin Chivers, with Andre Villas-Boas' side having now won all three of their matches in the group stages.

Sheriff started well but would have been cursing their luck as the Premier League outfit took the lead from their first meaningful attack.

Erik Lamela took a short corner to Christian Eriksen, and Vertonghen rose above Miral Samardzic to head in the Dane's curling cross.

Sheriff should have responded just three minutes later, but after rounding Tottenham goalkeeper Hugo Lloris, Henrique Luvannor was denied by a goal-line clearance from Vlad Cliriches.

That was a rare chance in a sustained spell of Sheriff dominance though, as Ismail Isa had a goal ruled out for offside before the same player curled an effort just wide with the Tottenham defence at sea.

Spurs were forced to re-shuffle their defence after left-back Ezekiel Fryers was forced off with a groin injury just after the half-hour mark, but they continued to struggle with the pace and dynamism of Isa and Luvannor, with the latter shooting just over on the turn seven minutes before the break.

After a slow start to the second half, Lennon saw a 20-yard effort hit the post, while at the other end, Tottenham substitute Michael Dawson was in the perfect position to block a goal-bound Ricardinho strike.

Tottenham sealed the victory in the 75th minute though, as Defoe fired in from 25 yards thanks to a wicked deflection that deceived Tomic.

Defoe almost scored again one minute later, poking just wide, while Isa wasted a chance to give the hosts a lifeline as Tottenham maintained their perfect start.