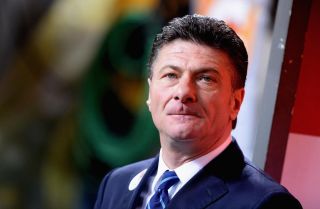 The Icelandic outfit - best known outside their homeland for a series of innovative goal celebrations that went viral - have taken many people by surprise with their progression through the preliminary stages, seeing off Bangor City and Motherwell before upsetting the odds to dispose of Lech Poznan in the last round.

Their play-off opponents Inter are an entirely different proposition, however, and Stjarnan will need to make the most of any opportunity to find the back of the net and show off their famous choreographed routines.

But coach Runar Pall Sigmundsson is not daunted by the challenge and intends to go about frustrating Inter during Wednesday's first leg in Reykjavik.

"Many gave us no chance against the clubs we have played so far, and that will not change [against Inter]," he is quoted by UEFA.com. "They will put us under serious pressure, as all the other clubs have, but we can make it tough for them.

"It is not easy for any club to play against a disciplined and well-organised defence, but of course Inter could also win by a big margin."

On paper, Inter's progression to the group stage appears straightforward.

The San Siro outfit endured a season without European football for the first time since the 1999-2000 campaign last term, but the draw could not have been more favourable this time around.

Defender Juan Jesus is well aware his side will be expected to qualify over two legs, and urged his team-mates to remain focused in what he believes could be beneficial conditions.

"We know very well what our responsibilities are for this match," he told the club's official website. "We are doing everything in the best way in order to be ready for the match and do well.

"I think it's better that it could be a lower temperature. With the heat, the tiredness is greater, while in the cool we feel fatigue less.

"We need to do our best so that we are calm during the return at San Siro.

"The boss is doing well and he is trying to do a lot of things to win the game."

Stjarnan are currently midway through their domestic league campaign, holding a three-point lead at the top of the Urvalsdeild having not lost in 15 matches so far this season.

Inter, meanwhile, do not get under way in Serie A until August 31 when they visit Torino.

Close-season arrivals Nemanja Vidic, Dodo, Yann M'Vila and Pablo Daniel Osvaldo could all make their competitive debuts for Inter this week, while Rodrigo Palacio will be absent for fitness reasons after being withdrawn from the 21-man squad on Monday.