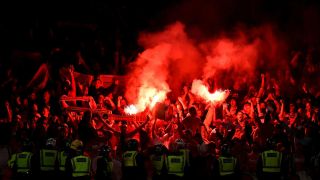 UEFA has announced the appointment of an ethics and disciplinary inspector to investigate the delayed Europa League match between Arsenal and Cologne.

There were chaotic scenes at the Emirates Stadium this month as Cologne fans travelled in huge numbers for the club's first European game since 1992-93, despite a limited ticket allocation for away supporters.

Many Cologne fans managed to acquire seats alongside Arsenal supporters, causing some alarm within the nominal home section, while there were reports of isolated incidents of aggression towards stewards and officials.

In a statement released on Friday, UEFA announced the inspector will "contact both clubs in order to evaluate the scope of their respective responsibility as regards the incidents connected to this match".

The Premier League and Bundesliga clubs were not the only teams to come under UEFA scrutiny after recent matches.

Spartak Moscow have been fined €60,000 and banned from selling tickets to their supporters for the team's next away game after the setting off of fireworks and throwing of objects in the 1-1 Champions League draw at Maribor.

Sevilla coach Eduardo Berizzo received a one-match touchline ban for being sent to the stands during the 2-2 draw at Liverpool for twice throwing the ball away.

Finally, Hajduk Split have been fined and must pay costs to Everton after the Croatian club's fans threw objects, caused crowd disturbances, invaded the field and caused damage in the Europa League qualifying play-off at Goodison Park. The Toffees received a smaller fine for the throwing of objects.