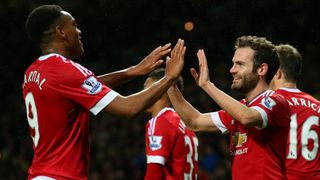 Anthony Martial is proving his worth in a Manchester United shirt, according to team-mate Juan Mata.

The former Monaco forward, who joined United in a big-money deal in September, provided two assists as United triumphed 3-1 over Derby County in the FA Cup fourth round on Friday.

Martial has scored eight goals in 28 matches for United in all competitions and Mata is confident the Frenchman can continue to improve.

"I've been really impressed with him," Mata told MUTV. "He's a very good player. He has a lot of good things and can beat almost anyone one-on-one.

"He can do great crosses like we saw when he passed back to me for the goal and I really enjoy playing alongside him, because he's a very good player.

"He has incredible potential. I think he has to keep calm, which I think he is. He has to show what he has shown in almost every game, and for me he is an unbelievable player."

Mata made sure of progression by netting United's third at the iPro Stadium and believes Louis van Gaal's men – often criticised for their lack of attacking ambition this season – are moving in the right direction.

"I think we did what we have to do every game – we were quicker, we created chances and tried to play in a positive way," he added.

"It's not easy to come here and play football, especially in the first half because they pressed a lot, but I think in the first 30 to 35 minutes we were very good.

"In the second half, we controlled the game, they didn't create almost any chances and we scored two more goals.

"We kept doing what we had to do: quick passing, trying to get forward, playing in the holes, and trying to turn and play forward, and I think we did quite well and that’s why we won.

"When you play for Manchester United there's pressure on every game, you have to win every game and I think we managed the pressure, we played good football, and now we're looking forward to the next game on Tuesday in the Premier League."