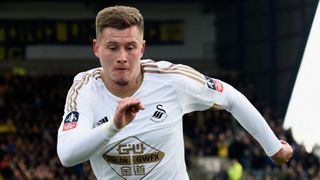 Swansea City have allowed Franck Tabanou to rejoin former club Saint-Etienne on loan for the rest of the campaign, just seven months after the defender arrived at the Liberty Stadium.

The Frenchman's chances have been limited in south Wales this season, with Tabanou only making three appearances and none in the league.

Tabanou moved to Swansea in June after spending two years at Saint-Etienne, helping them into the Europa League last term, and hit out over a perceived lack of opportunities with the Swans.

"I had gone to Swansea to get to the next level, to get my foot in the Premier League and to then go higher," Tabanou told L'Equipe.

"Unfortunately it didn't happen the way I wanted. They did not give me my chance. I do not understand.

"And I think, if I had stayed, my situation wouldn't have changed. The club is in a terrible situation and, despite that, they never let me play.

"Tactically they are not at the top. They have their players, they will fight until the last minute. This is not the way I play. I might have been able to make more effort but I also expect an effort from them."