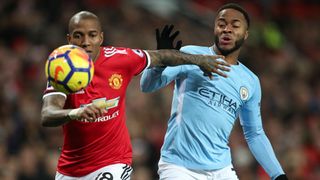 Ashley Young insists Manchester United have not been in awe of Manchester City's performances this season.

Pep Guardiola's side won the EFL Cup final against Arsenal last week and are cruising towards the Premier League title, with a 15-point lead at the top ahead of their meeting with champions Chelsea on Sunday.

Barring a dramatic collapse in the coming weeks, it will be the second time City have been crowned champions in the last five seasons, while United have not been close to a title triumph since Alex Ferguson's retirement in 2013.

But Young insists they have plenty to play for domestically and in the Champions League and says City are not discussed by the squad.

"We aren't in awe of Man City," he told The Daily Mail. "They have had a good season, you can't get around that, but we talk about ourselves.

"Credit to them, they have done fantastically well this season. But we're fighting on all fronts. Even in the league, until the points are done and they've won it, we've got a lot to play for."

82 - Manchester City have now scored more Premier League goals this season (82) than they scored in the entirety of last season (80). Insatiable. March 1, 2018

Young has established himself as Jose Mourinho's first-choice left-back, ahead of Luke Shaw, Matteo Darmian and Daley Blind, and his performances led to an England call-up last November for the first time in five years.

The former Aston Villa star now hopes to be part of Gareth Southgate's World Cup plans, having missed out on a place at the 2014 finals.

"Of course, it was bitterly disappointing," he said of not going to Brazil. "I'd been to the Euros but the World Cup is a pinnacle.

"I've never had an ego about [my position]. Things can be dissected too much. It's football: go and play. There's two goals, there's the ball, go and score.

"If I'm asked to play a certain position, I'll do it 100 per cent. Not to fill in, to cement a place. I can play in six different positions where managers can trust me. It must give them food for thought knowing I can do a job in different positions.

"Maybe that versatility could help with England. The World Cup is coming up quicker than people realise. My last call-up was brilliant. I would like to think I deserved it, the manager said he would pick players on form and I think I've been playing well this season.

"There is another England squad in the next couple of weeks. Hopefully, I can be in that and then we have to wait and see. I've got to carry on what I have been doing and hopefully get the recognition."

Now 32, Young admits he wants to retire at United, having shrugged off speculation about his future on more than one occasion since his move in 2011.

"It's reported every year that I am about to leave but I've always wanted to be here," he added. "I'd like to finish my career at United. I've got that mentality to keep going and change people's minds.

"I know how to play the game, I've got a football brain, and feel as fit and healthy as I did when I was younger. I'd be able to give the 23-year-old me a race."