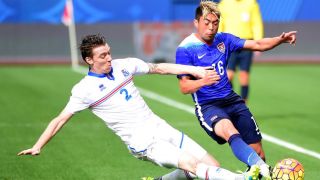 A 90th-minute header from Steve Birnbaum saw the United States to a come-from-behind 3-2 win over Iceland on Sunday.

The defender's first international goal came at the perfect time for Jurgen Klinsmann's men as he powered in the match-winner at the StubHub Center.

USA had needed goals from Jozy Altidore and Michael Orozco after finding themselves behind twice.

Kristinn Steindorsson and debutant Aron Sigurdarson had given Iceland their leads before they were pegged back on both occasions and eventually punished for poor set-piece defending.

USA enjoyed the better of the first half and finished strongly, and they get a chance to build on the display when they face Canada in another friendly on Friday.

In USA's first outing of the year, goalkeeper Luis Robles made his first international appearance since July 2009.

Kellyn Acosta and Ethan Finlay made their debuts, while Klinsmann gave Lee Nguyen his maiden start before bringing Jerome Kiesewetter and Tony Tchani off the bench for USA bows.

As they continue preparations for Euro 2016, Iceland had Sigurdarson in their team for the first time.

USA made the better start in heavy early rain, only to fall behind against the run of play in the 13th minute.

The hosts failed to deal with a ball into the area and Steindorsson made it two goals in as many internationals as his left-footed effort took a huge deflection.

Gyasi Zardes should have put Klinsmann's men on level terms, but he headed a cross from Nguyen into the ground and over the bar.

However, they equalised in the 20th minute through Altidore, who finished neatly after being slipped in behind by Michael Bradley.

Both teams had their chances as the half wore on, while Zardes threatened shortly after the interval.

But Iceland, who made numerous changes at the break, regained the lead early in the second half as the rain cleared in California.

After a quick free-kick left USA flat-footed and debutant Sigurdarson ran at the defence before curling a fine finish into the bottom corner from inside the area.

But, for a second time, the hosts responded, Orozco helping on a Birnbaum header to level after a corner had only been cleared as far as Altidore just before the hour-mark.

Both sides chased a winner in the dying stages and USA found it via Birnbaum, who headed in a Bradley free-kick from the right.