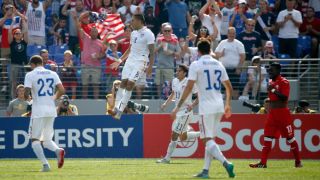 Clint Dempsey struck a hat-trick as United States cruised into the CONCACAF Gold Cup semi-finals with a 6-0 thrashing of Cuba on Saturday.

The Seattle Sounders star took his tally to 47 international goals with the treble at the M&T Bank Stadium in Baltimore, Maryland.

Dempsey, who opened the scoring before adding two goals in the second half, is now within 10 of USA's all-time leading goalscorer Landon Donovan.

Dempsey is also the leading scorer at this year's Gold Cup with six as USA close in on their sixth title ahead of a semi-final meeting with either Haiti or Jamaica.

For Cuba, it ended a tournament at which they encountered numerous issues – most notably VISA concerns.

USA were dominant from the outset, and they needed just four minutes to turn their bright start into an early lead.

The hosts continued to dominate possession and they doubled their lead in the 15th minute.

This time it was Zardes' run in behind picked out as he tapped in a Fabian Johnson cross to make it 2-0.

Johannsson would have a hand in the next two goals, which both came before the break.

The AZ Alkmaar striker scored with a delightful chip over a stranded Guerra in the 32nd minute after getting on the end of Michael Bradley's pass.

The fourth came just before the break as Johannsson headed a Bradley corner back across goal and Gonzalez was on hand to tuck away a finish.

It was a more even contest to start the second half, but USA sealed their win just after the hour-mark.

Johannsson was dragged down by Angel Horta inside the area and Dempsey stepped up to convert the penalty straight down the middle.

Dempsey put away a Bradley pass in the 78th minute to complete the rout and his hat-trick as USA claimed an easy win.