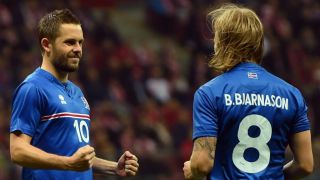 Iceland have named an experimental squad for Sunday's friendly with United States as they continue to plan for Euro 2016 and the World Cup 2018 qualifiers.

Since qualifying for the Euros in France back in October, Iceland have won just one of their friendlies - beating Finland during their recent training camp in United Arab Emirates.

After this weekend's test against the US, Iceland have four further games scheduled before getting their Euro 2016 campaign under way against Portugal on June 14.

"We have to prepare for the Euros in France, whilst also preparing for the upcoming qualifiers for the 2018 World Cup," joint manager Hallgrimsson said this week.

"Qualifying begins in September and it is important to work on preparation steadily throughout the year, as we have done by sending officials to analyse the teams that are with us in the World Cup group and who we will play at the Euros in France.

"As with the project in the United Arab Emirates, we used [friendlies] to give people the opportunity to work with us, get to know the international framework and prove themselves.

"We have a nice mix of newcomers and more experienced players. It will be interesting to see all the players."

Jurgen Klinsmann's USA have been involved in their traditional January training camp for the past two and a half weeks with a blend of senior internationals and under-23 players due to feature against Iceland and Canada over the next two weekends.

The friendlies come prior to an important spell for the US, who host the Copa America Centanario in June before completing the fourth round of their 2018 World Cup qualification campaign in September.

Defender Michael Orozco was the latest to be added to Klinsmann's training camp this week while LA Galaxy's 24-year-old forward Gyasi Zardes joins Michael Bradley, Jermaine Jones and Jozy Altidore among the more experienced members of the squad.

"For me getting called in to this camp, I'm taking every opportunity to give it my all," Zardes told the US Soccer website. "If I get called in to various camps to come, as far as the World Cup qualifiers or the Copa America Centenario, I'm going to seize the moment and the opportunity.

"Now that I'm coming into my second January camp I feel like I'm much more prepared because I know how the system works.

"It helps me as a player be more confident coming in. I know I have to work hard day in and day out because there's a lot of great American soccer players that are coming up, and everybody is always trying to get a spot on the roster."