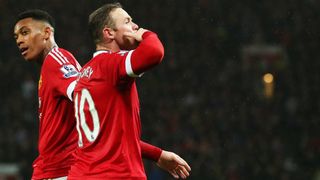 Manchester United manager Louis van Gaal said an anger within the dressing room was the catalyst for the team's first win in nine games.

United defeated the struggling Swansea 2-1 courtesy of goals from Anthony Martial and Wayne Rooney - ending an eight-game winless run to ensure 2016 started on a winning note after a woeful December.

Van Gaal said the players were furious with their form leading into the match at Old Trafford.

"It’s because they were very angry that we have lost so many games in a row," the Dutchman said.

"So it’s unusual and they’re angry and want to change the situation. We shall do our utmost best, fight to the end — and they have done that.

"I think now the pressure is lowering, the performance shall be better every week. But that it is also dependable on whether or not we score goals, because we are always creating chances."

Rooney's performance in particular was worthy of note for Van Gaal, who noted the United skipper's improvement against Chelsea in a 0-0 draw a week ago.

England's all-time top scorer moved up to second on the United all-time scoring list when he produced an audacious flick to score United's winner against Swansea.

"I liked him also against Chelsea. That’s why I said after this game that he has played two fantastic games in a row," said Van Gaal.

"He does everything we expect from him as a captain, but also as a player and in what position he plays.

"I hope that it can give a boost to him, because the goal was fantastic. There was not so much space and still he ran to the first post and did it this way, so it was fantastic and I am very happy for him.

"I hope it shall give him the boost he needs to continue his good form."