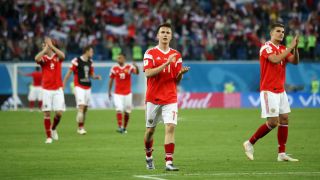 Stanislav Cherchesov and Oscar Tabarez will have to juggle pragmatism and momentum on Monday when Uruguay and Russia clash in Samara.

Both teams have won their opening two matches - in contrasting fashion - and already qualified for the round of 16.

Andrei Kanchelskis may have described them pre-tournament as "the worst Russian team I have ever seen" but that kind of negativity has not rubbed off on Cherchesov's men, who swept past Saudi Arabia 5-0 on opening night before subduing Egypt and Mohamed Salah to make it six points from six.

Uruguay, on the other hand, have been less entertaining and less convincing.

A 1-0 defeat of Egypt was mirrored against Saudi Arabia but Tabarez's side undoubtedly have more to prove in their last group game.

Their struggles so far mean a shake-up in midfield is likely, with Sampdoria's Lucas Torreira a certain inclusion after impressing as a substitute against the Saudis.

Elsewhere, the South Americans must decide whether to rest strike duo Luis Suarez and Edinson Cavani while defenders Jose Gimenez and Diego Godin may also be preserved for the tougher tests to come - Spain or Portugal most likely await next.

For Russia, it's a case of maintaining the impetus - and the feelgood factor that has swept across the country - while giving some fringe-players match time.

Left-back Yuri Zhirkov is one player who could sit out, despite returning from a foot injury to keep Salah quiet in the 3-1 victory on Tuesday.

Team doctor Eduard Bezuglov said: "After the game against Saudi Arabia, Yuri had a foot tendon injury. He did a great job recovering, doing everything the doctors required of him.

"Everybody admired Salah for how he went back after his shoulder injury in less than a month. Believe me, Zhirkov had a problem at least as severe as Salah but he went to play anyway and proved his top level.

"Now he's recovered and will prepare to for the next game."

Russia's players are clearly enjoying their new-found status having been widely ridiculed in the build-up to the World Cup and Aleksandr Golovin has been overwhelmed by the backing.

He told FIFA.com: "The atmosphere of the World Cup can't be compared to anything. It's just crazy.

"Even Champions League games against big clubs like Manchester United can't be compared to this. Obviously because the World Cup is in our country most of the fans support us in every game.

"It's very nice to see such passionate support, full stadiums in each game. This is necessary for our team."

The 22-year-old from Fray Bentos, widely linked with Arsenal, is set to be handed the chance to stake a claim for a place in Tabarez's midfield. Neat in possession, he will hope to provide a level of control missing in Uruguay's games in Russia so far.

Has covered more ground - 25 kilometres - than any other player at the tournament and has emerged as the driving force of the 'new' Russia.

- Russia have won six of their eight meetings against Uruguay (D1 L1; includes games as the Soviet Union). However, both nations have a win apiece at World Cup finals.
- Russia have lost each of their last four World Cup meetings with South American sides, scoring just once - including their 1970 World Cup loss to Uruguay.
- Russia have scored more goals in this World Cup (8) than they had in their previous two World Cup tournaments combined (6, across 2002 and 2014).
- Each of the last three European host nations of a World Cup prior to 2018 have won all three of their group stage games (Germany 2006, France 1998, Italy 1990).
- Russia have a positive goal difference of +7 in their opening two World Cup matches in the 2018 tournament. All three of the previous host nations to have a +5 goal difference or more in their opening two games of that World Cup have gone on to win the tournament: France (+7) in 1998, Italy (+6) in 1934 and Uruguay (+5) in 1930.
- Fernando Muslera could win his 100th cap for Uruguay in this match (currently on 99) and would become the seventh player to reach the landmark for La Celeste.
- Denis Cheryshev is Russia's top scorer in the tournament with three goals – prior to their opener against Saudi Arabia, he had failed to find the net in 11 appearances for the national team.