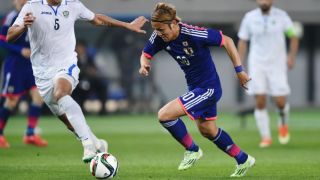 The Gamba Osaka man has 10 goals in 12 J.League games this term and opened his international account in Japan's 5-1 friendly win over Uzbekistan in March.

Usami, who came off the bench to register his first Japan goal, will challenge the likes of Yoshinori Muto and Shinji Okazaki - set to be team-mates at Mainz next season - for a starting berth in Saitama on June 16.

European-based players such as Keisuke Honda, Shinji Kagawa and Yuto Nagatomo are included in a strong squad as Japan look to hit the ground running in a group that also includes Syria, Afghanistan and Cambodia.

Japan have a friendly against Iraq in Yokohama five days before the Singapore fixture.