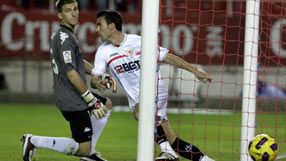 The Andalusians made a bright start at the Sanchez Pizjuan stadium but just as Valencia looked to be getting into their stride Turkish midfielder Topal clashed with defender Martin Caceres and was shown a red card midway through the first half.

Television replays suggested little contact was made and Caceres did his best to influence the referee by theatrically flinging himself to the ground and rolling over several times.

Valencia kept the home side at bay until the break but their task was further complicated by an injury to goalkeeper Cesar Sanchez and he was replaced by Vicente Guaita for the second period.

Sevilla took the lead in the 54th minute when Guaita spilled a long-range Caceres effort and substitute Alvaro Negredo lashed the loose ball through the keeper's legs and into the net.

Sevilla's Brazil striker Luis Fabiano struck a shot against the crossbar in the 61st before Alejandro Alfaro, another substitute, made it two in the 77th when he nodded home a Mouhamadou Dabo cross.

"We had control of the ball but we were finding it hard to finish off the attacks," Negredo said in a television interview.

"The game opened up a lot more after the sending-off and we defended very well against their counter-attacks," he added.

The defeat left Unai Emery's Valencia side, who have lost three and drawn one of their last four matches, in fifth on 17 points. Sevilla also have 17 but an inferior goal difference and are in sixth.