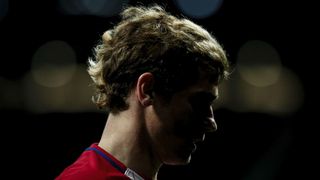 Ernesto Valverde believes Antoine Griezmann will provide a major threat to Barcelona's LaLiga ambitions on Sunday but the Camp Nou boss would not be drawn on speculation over the France forward's future.

Griezmann enters the top-of-the-table clash in incredible form, having followed a hat-trick in last weekend's 5-2 win at Sevilla with all four in the 4-0 thumping of Leganes on Wednesday.

The latest round of transfer rumours in the Spanish media this week suggested Barca were moving closer to securing a deal for the 26-year-old, despite Atleti complaining to FIFA over the LaLiga leaders' alleged pursuit of their player at the end of last year.

For his part, Griezmann is simply focused on scoring a first career goal at one of football's most celebrated arenas, telling reporters "I really want to score and celebrate it on Sunday".

"Well I'd rather he saved his goals for another time," Valverde said in response at his pre-match news conference.

"As for his future, I can't tell you but he's a player who's in excellent form at the moment.

"Tomorrow he's one of the strengths of the Atleitco Madrid team. We're going to have to look after him very closely."

Pressed again on whether he would like Griezmann at Barcelona next season, Valverde added: "Look, he's a very good player. I have no doubt about that.

"He scored four goals the other day and three the time before.

"But I'm not going to talk about a player who plays for another team, especially one we are playing the next day. That would be improper."

Sunday's match has taken on added weight due to Atleti taking chunks out of Barca's once-formidable lead at the summit.

Their advantage has been trimmed to five points on the back of midweek action that saw Las Palmas hold Valverde's team to a draw.

Far from being unsettled by this state of affairs, the Barcelona head coach expects his star men to rise to the occasion.

"The games this season that have been really tough and tight, where there have been things at stake, we've responded," he said.

"Look at the game away to Atletico [a 1-1 draw in October], we played very well. Juventus at home [a 3-0 win in September] there was tension we might not win. We ended up top of the Champions League group.

"In the game at Stamford Bridge [1-1 in the Champions League last month] we played good football and let's not forget the Bernabeu [a 3-0 Clasico win in December].

"I think the team responds to the big occasions but we're playing big teams who have their own weapons as well."

Ernesto Valverde: "We are sure the Camp Nou will respond due to the importance of the match. It's guaranteed the fans will make noise." March 3, 2018

Atletico's title challenge is built on a miserly defence, breached only 11 times over the course of 26 games in LaLiga, but Valverde expects them to be buoyed by their recent prolific form.

"They tend to alternate during their games so I suppose they'll do something similar tomorrow," he added.