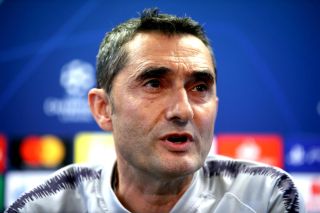 Valverde is closing in on completing back-to-back domestic doubles but has overseen embarrassing Champions League exits in both of his seasons in charge at the Nou Camp.

Barcelona blew a 4-1 first-leg advantage to lose on away goals against Roma in last season’s quarter-finals, before Liverpool overturned a 3-0 Nou Camp deficit to win 4-3 on aggregate at the last-four stage this year.

But Bartomeu told the club’s website: “He is the coach we want, he is under contract and we are very happy with him.

“Planning for next season has been under way for some time. Some players have already been signed and we’ll talk further after the Copa del Rey final.

“Our main objective is LaLiga and, after that, we want the Copa del Rey and the Champions League.

“We won LaLiga with some games in hand. We all want more.

“Now the Copa del Rey final is coming and we’re coming off a painful loss.

“It’s time to pick our heads up, to get excited and to get motivated to compete.”

Barcelona face Valencia in the Copa del Rey final on May 25 as they look to win the competition for an unprecedented fifth straight year.