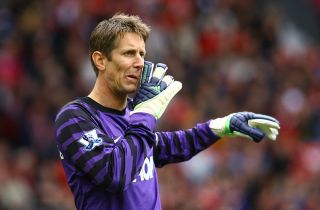 Moyes' start to his Old Trafford reign has been underwhelming, with the English champions pocketing just 10 points from seven outings to sit in mid-table.

Van der Sar, who stood in United's goal from 2005 to 2011, said following on from legendary manager Sir Alex Ferguson was always going to produce teething issues for Moyes and his squad.

"You have had so much success over the years with Ferguson. It's normal that you adjust and even Ferguson did not win the league all the time," the Dutchman said.

"There's a chance that you don't win in the first season.

"Or even the second season but hopefully there's faith in what he can do.

"I know the directors and the owners are not panicking quickly so I don't see a problem."

Van der Sar heaped praise on successor David de Gea, who came under the spotlight for poor form early on following his switch from Atletico Madrid in 2011.

"It's normal that he could have some problems in the beginning," Van der Sar said.

"But the way he turned the corner from January (2013) onwards, I think that's been a real benefit for United and one of the two or three reasons they won the league.

Van der Sar added the 22-year-old shot-stopper still had plenty of time to earn the number one spot in the Spanish national team set-up, with the custodian uncapped at senior level for the reigning World Cup and European champions.

"He's still so young and he's already experienced and hopefully he's also going to get a chance in the national team for Spain," Van der Sar said.