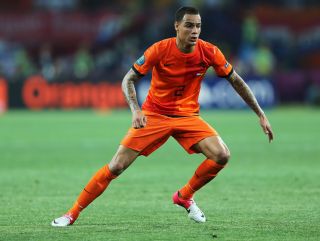 The Paris Saint-Germain right-back has not featured for his country since their embarrassing UEFA Euro 2012 group-stage exit.

However, he has been in fine form for the Ligue 1 table-toppers this season, making 11 appearances and contributing to nine victories for Laurent Blanc's side.

Wesley Sneijder, meanwhile, has retained his place in Louis van Gaal's squad. The Galatasaray playmaker returned to the fold for September's FIFA World Cup qualifiers with Estonia and Andorra, having been stripped of the captaincy and dropped in August.

However, there is also no place for Fulham goalkeeper Maarten Stekelenburg, who has recovered from a shoulder injury and resumed as the Premier League club's first choice.

Stekelenburg made three appearances in Netherlands' qualifying campaign, before his contribution was curtailed by injury.

Van Gaal will lead his side out against Japan at Genk's Cristal Arena on November 16 and they will face Colombia at the Amsterdam Arena three days later.