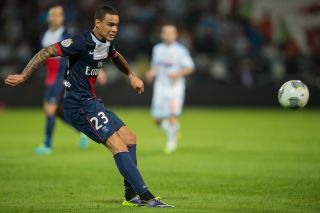 The 25-year-old had been included in Louis van Gaal's sqaud - who have already secured their place at Brazil 2014 - for their final qualifying games against Hungary and Turkey, which take place on Friday and next Tuesday.

However, after medical examinations, the defender has now gone back to Paris due to undergo treatment on the chronic tendonitis in his right knee.

"After travelling to Amsterdam and back, the Paris Saint-Germain defender returned to the Ooredoo Training Centre and he will remain to receive treatment during the international break," a statement on PSG's official website read.

The Netherlands secured their place at next year's showpiece in South America with a 2-0 win over Andorra last month, with both goals coming from Manchester United striker Robin van Persie.