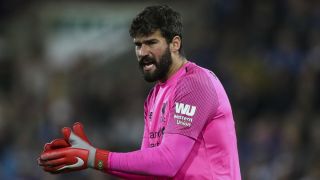 Liverpool star Virgil van Dijk hailed the "fantastic" Alisson after the goalkeeper helped his side into the Champions League knockout stage.

Mohamed Salah's first-half goal was enough for the Premier League leaders to edge Napoli 1-0 at Anfield on Tuesday.

But they needed some late heroics from Alisson, who made a good save to deny Arkadiusz Milik and help Liverpool hold onto second place in Group C.

Van Dijk, who is suspended for his side's next Champions League game after being booked for a dangerous tackle on Dries Mertens, praised the Brazil international goalkeeper.

"You don't think too much because it happens in a quick second," the centre-back told reporters.

"[It was a] fantastic save, very important for all of us and fantastic keeper."

Despite the success, Van Dijk warned his team they still had a lot of work to do this season.

"We want to achieve big things this season, like every year I think, and we're on a good way."