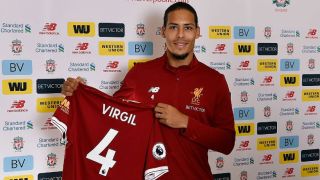 Virgil van Dijk's protracted move to Liverpool left Southampton "off balance" and under a "cloud", according to Saints chairman Ralph Krueger.

Van Dijk had been the subject of Liverpool's interest ahead of the 2017-18 season with Southampton reporting the Reds for making an illegal approach.

That forced Liverpool into an apology, Jurgen Klopp's side withdrawing their interest despite Van Dijk handing in a transfer request to force the move.

Southampton dug their heels in and refused to sell the Netherlands international but it left both club and player in limbo - Van Dijk left out at certain times by Mauricio Pellegrino and limited to just 12 Premier League appearances.

A move to Anfield finally materialised, the 26-year-old completing his move to Liverpool for a club record £75million on January 1.

Krueger is pleased the saga is now over, but admitted it had taken its toll on Southampton in the latter months of 2017.

"Emotionally, it threw us off balance and financially it was a huge business risk," Krueger told BBC Radio Solent. "To make a stand and principle like that creates an earthquake.

"In no way shape or form am I angry at any one individual for what has happened here in the past months.

"It was under the shadow of a stand and principle. That chapter closes now. The cloud was there, we allowed a certain negativity into our very fragile environment, which is based on positivity, creativity, unity and looking at solutions.

"I believe we can truly get back to that now."

Southampton head into Tuesday's clash with Crystal Palace 15th in the league table, just two points above the relegation zone.

However, Krueger is confident Pellegrino can guide them away from trouble in the second half of the campaign.

"We believe we can climb back up the table with the group we have," he added. "We're a club on a long-term plan.

"From the get-go, Mauricio has completely embraced the way we operate here. The transfer that has just gone through is the end of a very difficult phase for the club.

"We feel we have a superb group of players at the club and that we're well-poised to attack the second half of the season."