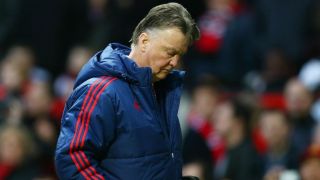 Charlie Austin marked his debut from the Southampton bench by heading home an 87th-minute winner, exposing set-piece frailties United displayed throughout another afternoon of discontent for the Old Trafford faithful.

Juan Mata replaced Marouane Fellaini at half-time as Van Gaal sought to create a spark, although he acknowledged the hosts went on to miss the Belgium international's aerial prowess in defensive situations.

An injury to Matteo Darmian forced Paddy McNair into the United defence after an hour and the decision to introduce winger Adnan Januzaj in place of Cameron Borthwick-Jackson during the closing stages backfired as the replacement fouled Austin to concede the decisive free-kick.

"I had a feeling they could score only from a set-play. They did not create other chances," Van Gaal told Sky Sports after he and his team were booed from the field.

"I wanted to win this game also and that's why I changed Borthwick-Jackson for Januzaj – he could have scored also.