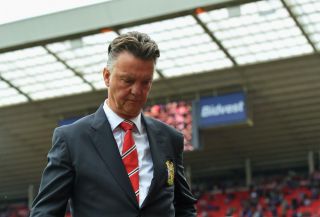 In a continuation of the Dutch manager's disappointing start to his reign, United only gleaned a point from a poor display that was hardly the rally many expected after the 2-1 home loss to Swansea City last Saturday.

United took the lead against the run of play at the Stadium of Light, Juan Mata opening the scoring in the 17th minute.

However, they were unable to take advantage as an unmarked Jack Rodwell levelled proceedings from a Sebastian Larsson corner before half-time.

And Van Gaal said: "One point, that is not good enough for Manchester United.

"We lost a lot of balls in situations where I don't expect it. We were dominating without creating chances. That is disappointing.

"I think that is down to the confidence. The play was much better in the United States [in pre-season].

"We have to improve but it takes time. You can never say how long it will take. If you win the next game, then confidence is coming back."

It seems help may be at hand with rumours that United will soon complete a British-record deal for Real Madrid winger Angel di Maria.

Van Gaal refused to be drawn on those links, adding: "I cannot say anything about transfers. When a transfer has been finished, then we can say something. If the moment is there, Manchester United shall announce it."

He then jokingly added: "It is not only Di Maria; maybe [Arturo] Vidal and [Lionel] Messi. Manchester United are a big club."