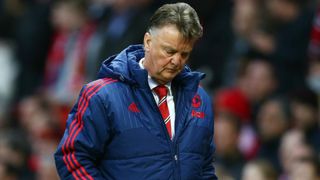 Manchester United manager Louis van Gaal apologised to the club's supporters for not being able to "fulfil their expectations" of him.

United suffered a 1-0 home defeat to Southampton on Saturday - their sixth loss so far in the Premier League, and ninth in all competitions.

Boos rang around Old Trafford, not for the first time this season, putting Van Gaal under more pressure than ever to retain his job.

And the Dutchman revealed his frustration with how his time at the club has panned out so far.

"I'm very disappointed that I cannot reach the expectations of the fans," he said.

"They have - or they had - great expectations of me, and I cannot fulfil them, so I am very frustrated because of that."

The loss to Southampton left United five points adrift of the top four, and 10 behind league leaders Leicester City.

Asked whether he has the appetite to continue at Old Trafford, Van Gaal responded with: "This question I shall never answer to you. We had to win this game and we could have won - but it's not happening.

"You have to play football to entertain the fans. I don't think we have entertained the fans, so they can be very angry."