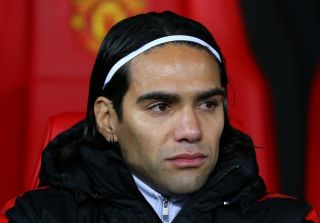 The Colombia international, on loan from Monaco, was ruled out for a month due to a calf injury suffered in October.

Falcao came off the bench in United's wins over Hull City and Stoke, and Van Gaal said he was "not interested" if the 28-year-old was unhappy with that.

"I have to adapt to the needs of the selection," Van Gaal said.

"Then I selected him in spite of the fact he can only play 20 minutes at that level because the rhythm of the game in the Premier League is the highest."

United made a slow start to the season as injuries threatened to ruin their campaign but four consecutive league wins see them sitting fifth.

Van Gaal said it was important for players to prove their fitness in training before making their first-team returns.

"Yes, we are seeing the light at the end of the tunnel," the Dutchman said.

"[Phil] Jones will train with the team next week if everything is good. Rafael has already trained with us for one week. Also now he has to play in the second squad.

"I'm sorry for that but it is my philosophy and the players [need to understand]. If they don't I'm not interested."