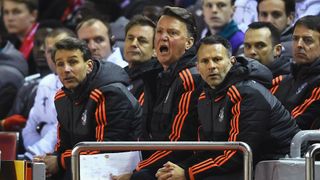 Former United duo Ferdinand and Scholes were scathing of Van Gaal and Co. after Liverpool moved within touching distance of the Europa League quarter-finals on Thursday.

Scholes questioned the need for a new philosophy at Old Trafford, while Ferdinand bemoaned the lack of fight from the players in such an important fixture.

But when asked to respond to their criticism, Van Gaal unleashed, saying: "I want to give a remark if it is important what Rio Ferdinand is giving.

"You don't give your opinion and you give Rio Ferdinand's opinion. Very strong of you.

"You have used another person to answer the question."

And while Van Gaal was unwilling to be drawn in to comment on the newest round of criticism he has received for his performance as United manager, he also refused to give up on the tie.

"Of course it is right, we did not create enough chances, I cannot deny that. I don't think that we were very creative, but it was also the defence of Liverpool, and you can give the greatest credit to Liverpool.

"We have to improve a lot to score goals though, we know. I have seen that we did not cope with the high pressure of Liverpool, we could not cope and that created a great atmosphere in the stadium."