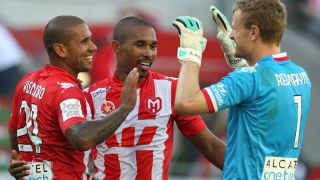 The likelihood of Van 't Schip's side featuring in the play-offs has increased with each passing week, and their fourth successive victory had the Dutchman taking more openly about the possibility than ever before, with the next hurdle to negotiate a derby against Melbourne Victory on Saturday

"We can make it because there are seven games and you are six points behind," he said.

"You can make it. It's all very tight. We have to enjoy the moment and keep on working hard. Next week there is another tough game."

Harry Kewell is set to resume training on Monday following two weeks out with a toe injury but is no certainty to return for that clash, which will necessitate a reshuffle at the back due to suspensions incurred through yellow cards picked up against the Roar.

"Aziz (Behich) is out, Patrick Gerhardt is out," Van 't Schip said.

"We get Robbie Wielaert back. We have to find a new left fullback.

"They come back from a heavy trip," he added, referring to Victory's AFC Champions League match away to Guangzhou Evergrande on Wednesday.

"That's something that is an advantage for us, but in saying that, it can also work that we underestimate (them). Victory had a great win yesterday, they're going to be coming here confident and with experience. We have to prepare really well and be as strong as we were today."

Asked if he felt he had now done enough to prove himself to Heart's new owners, Manchester City, Van't Schip said: "My only concern is to work with these boys. It's up to other people to decide what they want (to do) with the club.

"I already talk with them, I expressed that I like the club, I like the new plans.

"But it still, is up to everybody involved. Now is not the moment. We have to concentrate and try to play the next seven games ... as good as we can. We'll see what happens."