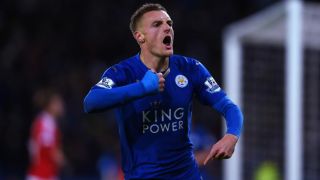 Leicester City could have Jamie Vardy back for Wednesday's trip to Tottenham after the England striker returned to training.

Vardy, the Premier League's joint top-scorer with 15 goals this season, missed Sunday's FA Cup clash at White Hart Lane after undergoing a minor groin operation but trained with the rest of the squad on Tuesday.

Foxes boss Claudio Ranieri indicated on Monday that Vardy could be involved against Spurs but may have to settle for a place on the bench.

He said: "Without the [groin] problem he is much better.

"He had the problem for about a month and a half and continued to play. Now without the problem he is much better.

"I will see his fitness to see if he starts from the beginning or if he comes with me on the bench."