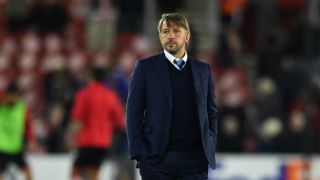 Inter caretaker boss Stefano Vecchi is determined to end the season on a high when they host Udinese on Sunday and has demanded "blood, sweat and tears" from his players.

The Nerazzurri endured a difficult 2016-17 campaign in which they parted ways with two coaches in Frank de Boer and Stefano Pioli and will miss out on European football.

They beat Lazio 3-1 last week to bounce back from their 2-1 shock defeat against Sassuolo and Vecchi hopes they can add three more points to their tally at the weekend.

"The very least Inter players must do is give blood, sweat and tears for the cause," Vecchi said at a media conference.

"I have seen lots of our players show how much they care about this club. Many have been training with the right attitude and they have shown it on matchday too. There is a sizeable group of players who are determined to end the season on a high and I think that was clear against Lazio.

"The players had different expectations for this season but they were not able to play to their full potential. Generally speaking, they have been working pretty well. Those who played against Sassuolo and Lazio showed dedication.

"We want to win our last game and my plan is to go with our strongest line-up."