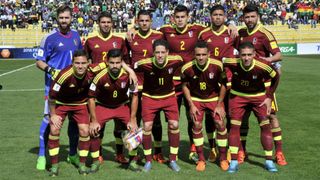 A number of the senior Venezuela players have threatened to quit unless the directors of the nation's football federation resign.

Captain Tomas Rincon and West Brom striker Salomon Rondon are among 15 players to have added their names to a statement released via social media in which they have hit out at their treatment at the hands of the FVF and its president Laureano Gonzalez.

Gonzalez had accused some of the first team of staging a dressing-room coup in order to see head coach Noel Sanvicente sacked.

"We the players are no longer in agreement that this group of leaders of the FVF should continue, as the way we have been treated and they way they have managed the project to reach the World Cup finals has not been acceptable," the statement read.

"We strongly believe the team needs a complete managerial change if we are not to lose the work done over the last eight years.

"Our integrity is non-negotiable and the damage done can only be repaired by a total overhaul of the leaders of the FVF. We can't continue playing in an environment so damaged by these leaders."

The current board has held power since former president Rafael Esquivel was arrested in Switzerland in May as part of the investigations into alleged corruption within FIFA.

Esquivel, who is accused of accepting bribes in relation to the sale of broadcast rights for the Copa America, received an extradition order in September after the Swiss Federal Office of Justice accepted he should face questions in the United States.

Venezuela have lost all four of their World Cup qualifiers for the 2018 finals so far.