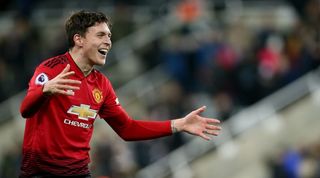 The West Midlanders attempted to sign the Sweden international ahead of the 2018/19 campaign, but Jose Mourinho did not want to lose the 24-year-old.

Lindelof has been one of United’s better performers in a turbulent season, but Ole Gunnar Solskjaer is expected to overhaul the squad ahead of next term and the ex-Benfica man could be among those who depart for the right money.

Nuno Espirito Santo is ready to test United’s resolve by launching another offer for the Swede's services at the end of the season.

Lindelof, who is reportedly also a target for Lyon, would presumably be keen on extending his Old Trafford stay, but could seek pastures new if Solskjaer deems him surplus to requirements.

United paid £30.7m to bring the Swede to the club in 2017, and the centre-back still has another two years to run on his contract.

Unpopular Opinion: PSG are NOT a plastic super club, you fools