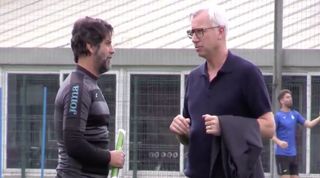 Pardew, who has been without a club since he was sacked by Crystal Palace in December, appears to be on his travels to better himself.

His destination? La Liga outfit Espanyol, where he looked to have received a very warm greeting by manager Quique Sanchez Flores on Wednesday morning.

Flores's Watford faced Pards's Palace in the FA Cup semi-finals last season, won 2-1 by the Eagles thanks to goals from Yannick Bolasie and Connor Wickham.

In the Premier League it was even stevens: during the single season Flores was at the Hornets, Pardew's Palace won 1-0 at Vicarage Road before Watford got their revenge with a 2-1 victory in the return fixture.

Judging from this clip, the two now seem to be good pals. You can provide your own voiceover to this one.