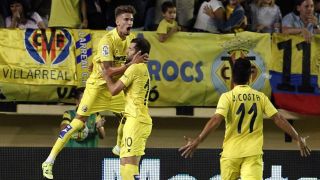 Leo Baptistao's early strike against his parent club was enough to clinch Villarreal a 1-0 victory over Atletico Madrid on Saturday as Marcelino's side made it five La Liga wins on the spin.

Like Atletico, Villarreal have enjoyed a strong start to the campaign, but it was the hosts who delivered another polished display at the Estadio El Madrigal to move above champions Barcelona and Real Madrid.

Villarreal - who remain unbeaten in the league this season - led 14 minutes in courtesy of on-loan Baptistao, who linked well with the returning Roberto Soldado to register his third goal of the campaign.

Jackson Martinez was handed another opportunity to impress as part of Diego Simeone's much-discussed rotation policy, but was withdrawn at half-time for Fernando Torres as Atletico stuttered in front of goal.

The visitors created chances and improved after the interval, but were unable to break down a resolute Villarreal defence as they drew a blank for the first time this season.

A second defeat of the campaign will add to Simeone's frustrations, while Villarreal's early momentum shows little sign of abating.

Amid an even opening, the hosts maintained their goalscoring form at Madrigal as Baptistao collected a pass from Soldado and swept the ball past Jan Oblak.

The slick move and finish paved the way for further Villarreal pressure, with Soldado forcing Oblak into a save from a tight angle soon after.

Martinez was denied an effort on target under pressure from Eric Bailly as Atleti enjoyed a rare foray forward early before the half-hour mark.

However, the hosts enjoyed the better of the first half, soaking up what Atletico had to offer and almost doubling their lead when Samu Castillejo sent a stooping header narrowly past Oblak's left-hand post.

A missed header from Victor Ruiz allowed Antoine Griezmann in on goal on the stroke of half-time, but Alphonse Areola was equal to it.

While Marcelino withdrew Baptistao at the break, opposite number Simeone introduced both Torres and Luciano Vietto in a bid to gain attacking momentum.

Former Chelsea striker Torres was quickly in the thick of things, hooking an effort at goal that was well kept out by Areola, while Baptistao's replacement Matias Nahuel saw a poor first touch rob him of a chance to shoot at goal when clean through at the other end.

While Atleti asked questions late on - substitute Angel Correa's shot well saved by Areola - the hosts saw out the victory with relative comfort, leaving Simeone with plenty to ponder in attack.