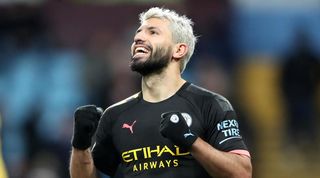 A 6-1 thrashing of Aston Villa moved the reigning champions into second spot on Sunday, although they remain 14 points adrift of leaders Liverpool.

Kompany, who won four championship crowns during his time at the Eithad Stadium, concedes that City are unlikely to finish on top of the pile for a third consecutive campaign.

But the central defender, who joined Anderlecht from City last summer, does not believe the race is over just yet.

"I never say it's [the Premier League title race] over with City. It's impossible to say," he said at a Football Writers' Association event on Sunday, in which he was honoured with a lifetime achievement award.

"But it is not in the hands of Manchester City and that's unfortunate but there is so many things to look forward to.

"Look at historically how City have been performing in cups and how the Champions League is still a massive target for the club.

"There is no reason to be disappointed about this season, there's still all to play for.

"When you have such a manager of the status of Pep Guardiola. It is a matter of cycles. Players left and players came in, it takes time.

"Even if you had a machine for two years, it's just cycles more than big changes or big signs to why they haven't kept up with Liverpool. We just need a new cycle."

Guardiola's side return to action in the Premier League on Saturday afternoon, when Crystal Palace will provide the opposition at the Etihad.

Victory will see City move to within 11 points of table-topping Liverpool, who have to wait until Sunday to take on rivals Manchester United at Anfield.