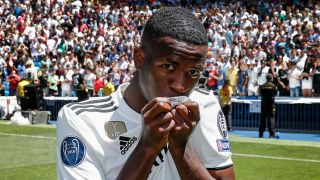 Vinicius Junior admits he would love to play alongside his "idol" Neymar, although it is unlikely to happen at Real Madrid this year.

The 18-year-old was presented at the Santiago Bernabeu on Friday after finalising his move from Flamengo for a reported fee of €45million.

The teenage attacker could be asked to help fill Cristiano Ronaldo's boots this season after confirming he would not leave on loan.

Neymar has also been heavily linked with the European champions as they look to replace Ronaldo, who left for Juventus, although he stressed at a charity event in Brazil that he wants to stay at Paris Saint-Germain.

Vinicius would relish the chance to play in the same side as Neymar but thinks it is more likely to happen with the national team.

"I think my style of play is similar to Neymar. They have compared me to [retired Brazil striker] Ronaldo but to be like both would be great," he said.

"Neymar is my idol, the idol of all Brazilians, of everyone. I dream of playing with Neymar, and if God wills it, I will play with him soon for Brazil."

Madrid president Florentino Perez also suggested there will not necessarily be a 'galactico' signing this year.

Perez set pulses racing on Wednesday when he indicated Madrid's squad would be reinforced with big-name replacements in the aftermath of Ronaldo's exit, with Eden Hazard, Thibaut Courtois and Kylian Mbappe linked alongside Neymar.

But Perez appeared to cool talk of an influx of established superstars by praising the arrivals of youngsters Vinicius and Alvaro Odriozola.

"Madrid is strengthening the process of searching for young players that can soon become great figures of the sport," he said.

"We said the other day that we would add magnificent players to our squad and that is what we are doing with Alvaro Odriozola and now Vinicius.

"He has seduced us with his incredible dribbling, technique, speed and goals. We believe that he's going to be one of the greatest of this new era that is approaching."