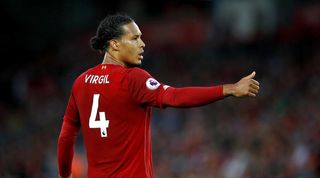 Virgil van Dijk is set to double his wages by signing a new contract with Liverpool, according to 90min.

Van Dijk has been a revelation since moving to Anfield in January 2018, tightening up the Reds' defence and leading them to Champions League glory last season.

The Dutchman is now widely considered among the world's best centre-backs and Liverpool want to reward him with a new deal.

Van Dijk's current contract runs until 2023, but the Merseysiders hope that the offer of fresh terms will underline how highly they value the former Southampton stopper.

The defender will earn £250,000 per week when he puts pen to paper on a new deal, which represents a 100% increase on his present pay check.

Liverpool host Arsenal in their third Premier League game of the season on Saturday.