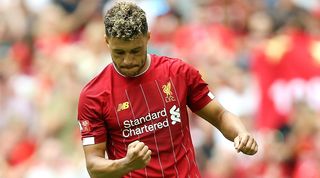 A ghost of Arsenal past will be a vision of a future they never reached. Their present includes a meeting with Liverpool on Saturday. It is a second successive reunion with old employers for Alex Oxlade-Chamberlain and, despite an encouraging display at Southampton, the chances are that he will begin on the bench against the club where he spent the majority of his career. He is only two starts into his comeback, after all.

Yet Oxlade-Chamberlain should concentrate Arsenal’s thoughts. Had Arsene Wenger’s masterplan of buying young Brits paid off, he would be found alongside Aaron Ramsey in the visitors’ midfield now. Instead, they are all gone; Carl Jenkinson’s move to Nottingham Forest signalled the end of an era.

And in their place – Ramsey and Oxlade-Chamberlain’s, if not Jenkinson’s – Arsenal have something of a void. Not in terms of talent, to judge by Dani Ceballos’s auspicious full debut, but in age. There is a gap, a divide. Alexandre Lacazette was the only outfield starter against Burnley aged over 23 and under 30; the only one, in short, who should be at his prime. If Liverpool’s age profile is almost perfect, Arsenal’s shows an imbalance, with emerging and experienced players but rather fewer in between. Oxlade-Chamberlain feels the patron saint of a lost generation.

It's why part of Unai Emery’s task (or, potentially, his successor’s) is to ensure Arsenal that don't have any more Oxlade-Chamberlains. The England international had his 2018/19 ruined by injury. Yet 2017/18, his first season after leaving the Emirates Stadium, brought the finest form of his career. Briefly, potential was realised at Liverpool, when Oxlade-Chamberlain was reimagined in the role he always wanted – as a dynamic, raiding central midfielder, scorer against and scourge of Manchester City.

There is another alternative history, too. When Liverpool bought him, the other offer came from Chelsea. Under Antonio Conte, another manager with a strategy for a transfer target, it is possible to envisage Oxlade-Chamberlain becoming the best wing-back in England; it was, after all, the position in which he finished his Arsenal career.

And if that versatility posed part of the problem – Oxlade-Chamberlain’s attributes were such that he could operate in several roles and settled in none – the other issue was that he had groundhog seasons at Arsenal, forever in and out, invariably a bit-part player, always 20 in the imagination even when he was actually 24. Arsenal were at first good for Oxlade-Chamberlain, giving him a chance he might not have got under more risk-averse regimes, and then bad for him.

Look at Arsenal now and Emery cannot be accused of conservatism. He has a group of embryonic Oxlade-Chamberlains and he has trusted them. Joe Willock, Reiss Nelson, Ainsley Maitland-Niles and Matteo Guendouzi have begun both matches. Emery has selected Nelson ahead of Henrikh Mkhitaryan and Nicolas Pepe, though the latter will surely displace the Englishman. He has picked Guendouzi and Willock when he could have chosen Lucas Torreira.

Like Oxlade-Chamberlain, they have shown an eagerness. Most have his blessing and curse: his versatility. Nelson can operate on either wing. Willock was a No.10 at Newcastle and operated deeper against Burnley. Maitland-Niles has flourished at right-back but could move into midfield when Hector Bellerin is fit again. They represent genuinely progressive management on Emery’s part. So did Rob Holding, one of last season’s greatest sources of encouragement before being injured.

In the short term, each can benefit from more exposure and experience, from a grounding whenever and wherever. In the long term, they have to avoid emulating Oxlade-Chamberlain by becoming the resident odd-job men, shunted in, around and out of the side, sidelined by signings, perhaps never prioritised because they are always there and always accommodating.

Oxlade-Chamberlain’s final figures at Arsenal told a tale in themselves: 68 league starts, 64 substitute appearances (while he has more cameos than starts at Liverpool, there is a different, upward curve; he was a replacement while he adjusted to Jurgen Klopp’s style of play and normally a starter thereafter). He was in and out. There will be the temptation to treat the new generation the same way; they have fulfilled a function by saving the club millions in the transfer market, but, without proper handling and planning, could be the underappreciated understudies, promoted to the squad but never to the status of a certain starter.

For Arsenal, perhaps the role model is the other Alex: Iwobi, maybe never quite going to become an elite player but producing a healthy profit when sold for £35 million. But Oxlade-Chamberlain should represent the cautionary tale for them; the case of arrested development, the player taken for granted, the one whose gifts were glimpsed in their colours at a young age but, ultimately, seen clearer by the managers of rival clubs. He was an example of Arsenal’s far-sightedness and then their short-sightedness – a case of them being first right and then wrong.