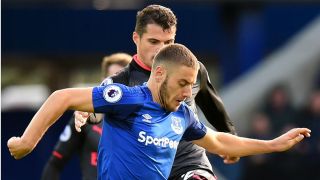 Everton winger Nikola Vlasic has claimed the Toffees were saving their number 19 shirt for Diego Costa in the last transfer window.

Ronald Koeman's tenure at Goodison Park came to an end on Monday, the Dutchman relieved of his duties on the back of a humiliating 5-2 defeat to Arsenal and a run of just two wins from 13 fixtures across all competitions.

Everton spent a reported £144million in the off-season, but the glut of new signings have failed to bed in on Merseyside, with no capable replacement for Romelu Lukaku among them.

One addition who has impressed however is Vlasic, who had started Everton's last four games prior to Wednesday's EFL Cup clash with Costa's former club Chelsea.

And Vlasic, who has been called up to Croatia's squad ahead of their World Cup qualifying play-off against Greece in November, says the club denied him the opportunity to take 19 as his squad number upon his arrival late in the transfer window.

"Number 27 was free, I wanted 8 but Ross Barkley wears it, while the club was keeping 19 for Diego Costa," Vlasic - who was sad to see Koeman leave the club - told 24sata.

"I'm sorry that Koeman got sacked, because he bought me and we had a really good relationship, but that's football.

"Everton is a great club for young players like Jordan Pickford, Dominic Calvert-Lewin, Ademola Lookman, Tom Davies, me. We all get chances; I'm satisfied."

Despite Everton's attempts to sign him, Costa eventually secured a return to Atletico Madrid, with the Toffees managing a meagre seven league goals so far.

Alexis Sanchez's stoppage-time strike inflicted the final blow to Koeman's reign, and Vlasic says the Chile star stood out above the rest of the Gunners' rampant frontline.

"In the Premier League, it's easiest when you have the ball at your feet," the 20-year-old continued.

"And the hardest thing to do is to play against a team that breaks you down with their rhythm, like Arsenal.

"I haven't had a chance to play against all of the strongest teams, but I was impressed by Sanchez. [Mesut] Ozil is great, but Sanchez is impossibly fast, strong, always creating, turning and moving."