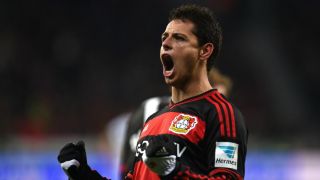 Bayer Leverkusen sporting director Rudi Voller says the club have no need to sell their star players in January, including Javier Hernandez.

The Mexico international was offloaded by Manchester United in August but has been a revelation during his time in the Bundesliga, winning back-to-back player of the month awards and scoring 19 goals in all competitions.

Hernandez's form has led to rumours of a potential return to the Premier League, with Arsenal credited with an interest, but Voller is adamant Leverkusen will not be allowing any of their key players to leave this month.

"We are a football club and it is important that we are successful," he told Sky. "Chicharito has played a big part in doing just that until now - through his style of play, and through his goals. That's why we brought him here. Until now, during the first part of the season, everything has worked out fine.

"Of course there are rumours around this time of year, that's normal.

"It's easy to reject offers when you are in a position in which you don't need to sell. We are in such a position. We will keep the players we want to keep to achieve our goals."