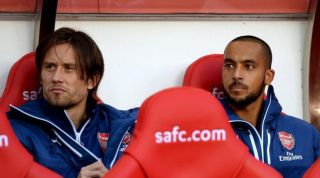 Walcott suffered a serious knee problem in an FA Cup game with Tottenham back in January, and has made just two substitute appearances this season as Arsene Wenger aims to gradually reintroduce him to first-team action.

On Thursday, Wenger suggested Walcott was fit for Saturday's meeting at the Emirates Stadium, but in his press conference on Friday, the manager declared otherwise.

"I don't think he will be available tomorrow," he said.

There was good news for Arsenal in the shape of Olivier Giroud's return to fitness after recovering from a broken leg, although Wenger revealed former United man Welbeck was a slight doubt with a hamstring complaint.

"His fitness will depend on the medical assessment in the morning," he said.

Talk of Welbeck has dominated the build-up to Saturday's game, with the 23-year-old departing Old Trafford at the end of the transfer window in order to secure first-team action.

United boss Louis van Gaal insists he has not been surprised by Welbeck's form since joining Arsenal, and Wenger is full of praise for the forward.

"Louis van Gaal didn't have him under his command for very long, so it's difficult to judge players," he said.

"Welbeck is still a young player. I can understand Van Gaal completely. What's important is that he gets an opportunity.

"In front of him, he had two great goalscorers in Wayne Rooney and Robin van Persie. What he needed was a chance.

"I always respected him and he has a great future. But he's gained more respect over the last few months.

"One reason we bought him was because he wanted to play. Playing centrally wasn't a condition."