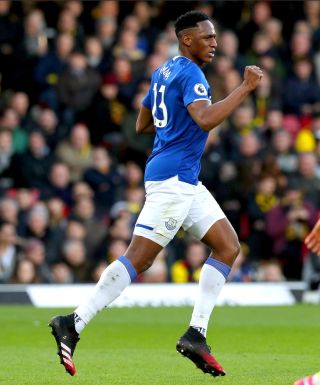 Theo Walcott hit a last-minute winner as 10-man Everton came from two goals down to secure a fine 3-2 win at Watford.

Yerry Mina had scored twice in first-half stoppage time to haul the visitors level and – despite losing Fabian Delph to a red card – Walcott delivered the killer blow as the travelling fans celebrated a remarkable victory.

The Hornets appeared on course for another fine result in their battle against the drop as Adam Masina’s first goal in over three years and a Roberto Pereyra strike had them two goals ahead.

But, having crumbled when falling behind in recent weeks, the Toffees instead rallied at Vicarage Road as Mina struck twice in quick succession.

Carlo Ancelotti’s side looked to be hanging on for a point but broke clear in the closing stages as Watford over-committed, and Richarlison’s pass was scuffed into the path of Walcott by Moise
Kean, with the former Arsenal man making no mistake with the close-range finish.

Watford started brightly and deservedly took the lead with 10 minutes on the clock, Masina defying his scoring record by finishing well for his first Watford goal.

The lead would be doubled three minutes before the break as Pererya ran onto a ball from captain Troy Deeney and slotted home coolly past Jordan Pickford.

Everton had hardly showed up for the first half but halved the arrears as the clock ticked into stoppage time.

It was a goal befitting of their scrappy start as Mina was on hand to finally turn the ball in for his first goal of the season after a goalmouth scramble followed an Everton corner.

Moments later and they were level, Watford again undone by a corner with Mina this time rising to head home Sigurdsson’s set-piece at the back-post.

Immediately from the restart Everton were again threatening from a set-piece but this time Watford were able to clear their lines with Dominic Calvert-Lewin lurking.

With Ancelotti’s side now on top, it looked like they would be the most likely winners only for Delph to be dismissed with 19 minutes remaining as he picked up a second booking of the afternoon for fouling Etienne Capoue.

Abdoulaye Doucoure sent a rasping drive wide as Watford pushed on for all three points but they could not make their advantage pay and remain in the bottom three as Walcott’s first goal since May secured the points for Everton.

The Toffees were stung by a last-gasp comeback against Newcastle last time out but their own late show in Hertfordshire moves them up to ninth in the table as they ended a run of 35 league matches in which they were winless having conceded the opening goal.