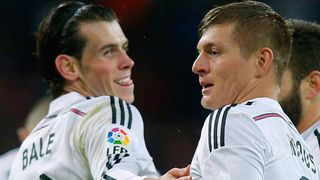 Wales star Gareth Bale hopes the side go on to face Germany in the Euro 2016 final after revealing banter between he and Real Madrid team-mate Toni Kroos.

Bale and Co. have defied the odds to qualify for the semi-finals of a major tournament for the first time, where they are set to meet Portugal on Wednesday.

In fact, Wales' appearance at the Euros in France is just the second time they have ever made a major tournament, after reaching the quarter-finals of the 1958 World Cup.

But as he prepares to compete in the biggest game in Welsh football history, Bale was in a jubilant mood as he faced reporters on Monday.

"I remember Toni Kroos saying we'd only have three games here," the 26-year-old said. "So it would be nice to meet him in the final.

"It was a good laugh and a joke - a bit of banter - but I've had a lot of abuse over the years.

"When we used to lose and we were 100th in the world, people would say, 'You have nine weeks' holiday instead of two'.

"So it's great to finally be in a major tournament actually doing great things with our national team."

He added: "We've obviously exceeded a lot of people's expectations, we understand that. But we always believed we could go all the way - you see the fairytale of Greece and Denmark in the past and you think, 'Why can't we do it?'.

"We grew as a team in qualifying and we've just grown more throughout the tournament. The England game [a 2-1 loss] we learned from our mistakes of not passing the ball.

"I fully believed that we could do something, that is why I booked my holiday for the 11th [of July]. I am not like the others. We gained a lot of confidence, especially from the Belgium game in qualifying.

"We felt we could beat the big teams and we have grown from there. We learned a lot from the first two games against Slovakia and England, we have really progressed since then and got a lot more confident."