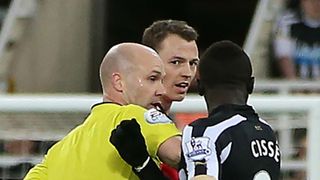 Manchester United defender Jonny athan Evans and Papiss Cisse were involved in a furore after appearing to spit at one another during Wednesday's Premier League contest at St James' Park.

The Football Association has subsequently charged both players for their actions.

Walters has had his say on the spit spat and was scathing in his assessment of the incident.

"As a player you take anything off the ball; pinches and kicks that are meant to wind you up," he told talkSPORT. "Little things like that go on in any match.

"But spitting is pretty low. If it happened to me and someone spat at my face or towards me then I think he'd be eating his supper through a straw that night.

"I wouldn't be that happy. It's the lowest of the low."